The PainMonitor index – Skin Conductance Algesimeter indices mirror how often the skin sympathetic nerves are firing to tailor the need of analgesia during pain, nociceptive stimuli and withdrawal symptoms.

We are developing a system that is wireless, miniaturized and wearable available from the first quarter in 2021 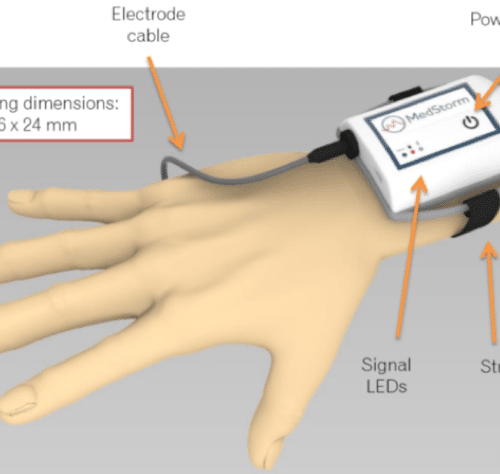 The solution intends to assess pain, nociceptive stimuli, awakening from anaesthesia, and regional nerve block for all patients (from preterm infants to adults). The low cost, disposable and hygienic PainSensor with electrodes will offer accurate, real-time, and objective pain assessment. The Pain Index will be transferred to patient data monitoring systems, and the PainSensor integrates with existing patient monitoring systems (Masimo, Mindray, Philips), where it offers a simple and real-time readout number to improve pain management. The PainSensor will be offered in the first quarter of 2021 after finalizing the MDR-approval process.

Special offers for early adopters of our new, wireless sensor.

The PainMonitor device, the Skin Conductance Algesimeter, has indices to tailor the level of analgesia during intensive care, postoperatively, and anaesthesia in all age groups as well for preterm infants from 23 weeks of gestational age (the device is not influenced from gestational and postnatal age). The Skin Conductance Algesimeter is not influenced by temperature (22 °C – 42 °C), general hypoxia, hypo- and hyper-volume, beta-blockers, epinephrines, and the hypotensive effect of alfa-2 agonists, as well as neuromuscular blockers (neuromuscular blockers act on nicotine receptors). This is due to the fact that skin sympathetic nerves, mirrored by skin conductance changes, have acetyl-choline acting on muscarinic receptors (atropine does not influence in clinical doses).

The Skin Conductance Algesimeter therefore meets the need to tailor analgesia when medications with hypotensive and blood circulatory effect, like alfa-2 agonists and beta-blockers, are used to reduce the level of opioids.

The Skin Sympathetic Nerves (assessed by micro-neurography) are the only sympathetic nerves in the body where acetylcholine acts on muscarinic receptors. How often these nerves are firing, number of bursts per time unit, is directly mirrored in real time by the Skin Conductance Algesimeter index which is based on skin conductance peaks per sec:

The Skin Conductance Algesimeter index before, during and after painful events, the skin conductance peaks per second increases (mirroring increased activity in the skin sympathetic nerves) during painful stimuli. The colour coded index goes to orange or red if the patient needs more analgesia.

The Skin Conductance Algesimeter index is based on the number of burst in the skin sympathetic nerves, mirrored by the skin conductance peaks per second, when assessing pain and nociceptive stimuli as well as withdrawal symptoms.

It is possible to choose among different applications.

A standalone monitor is also available: